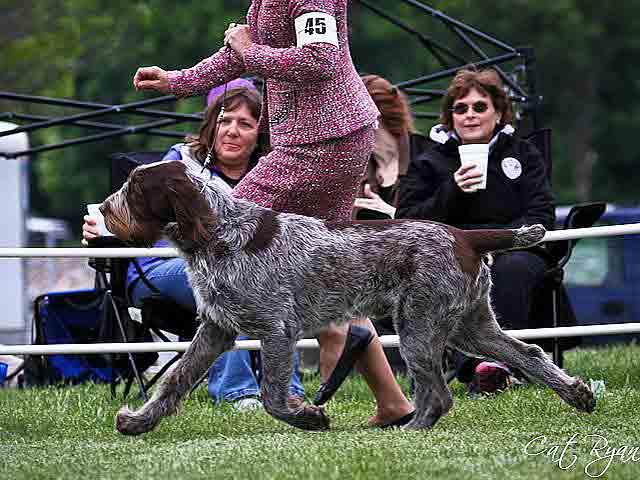 Bruno was awarded the Rufus Cup by the Spinone Club of America in 2013 presented to the Spinone demonstrating exceptional performance in the field and conformation ring. Few spinone have achieved both Master Hunter and Grand Champion titles, fewer yet also awarded Best in Speciality followed by Best of Opposite in Speciality. Bruno, Lucy’s son, is a prime example of the word “Robust” for Spinone breed type. Bruno exemplifies the field and conformation qualities prized in our breed.

Bruno is a proven sire of multiple litters, he recently became a grandsire. Bruno’s puppies have earned conformation championships, natural ability awards and AKC hunt titles. He is available at stud to approved bitches.

Maggie was the only Spinone in 2013 to earn the coveted NAVHDA Versatile Champion title. She is the ninth spinoni to be award a VC. Maggie completed the requirements of the AKC Master Hunter title. She was runner-up in the Spinone Club of America Field Trial Amateur Walking Gun Dog stake at 2013 SCOA Nationals. Maggie also placed third in an all breed field trial Amateur Gun Dog state, at the Southern Michigan Weimaraner Club on May 18, 2013. Maggie’s breadth of accomplishments in NAVHDA, AKC hunt tests, and AKC field trials were unmatched in the breed for 2013. Maggie is also an AKC conformation Champion. Maggie has produced get that have qualified for the NAVHDA Invitational as well as AKC Eukanuba National Championship.

Annie is our breeding, 2008 litter out of our Lucy and Guido’s Dino, she is a hard working field dog. Annie is also Bruno’s littermate. After her show championship & Master Hunter titles, Annie became a mother of 13 pups. She passed on her lovely breed type and hunting skills to her children and grandchildren. Annie has produced a NAVHDA Invitational and Eukanuba qualifiers. 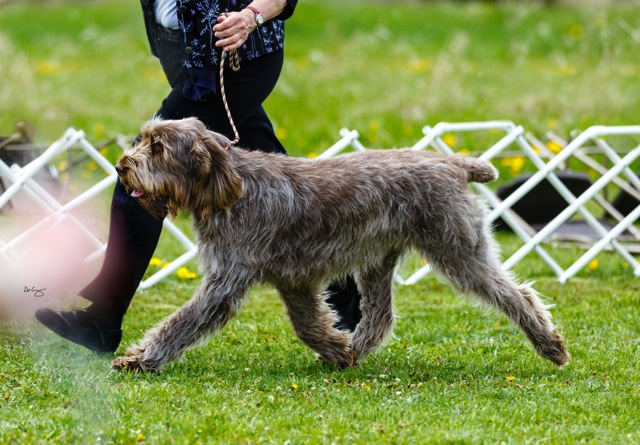 Flora, Bruno’s daughter, is a versatile girl. She has delved in, Agility, Obedience, Rally and AKC Hunt tests. Currently Flora is delaying her various titles to pursue motherhood.

Lela is very successful in the show ring. She is an Anne x Iba puppy. She exemplifies the unique “almost human” expression of our wonderful breed. Lela is reminiscent of so many of the dogs in her pedigree. She is “duck” crazy. She is just getting started in her field work. 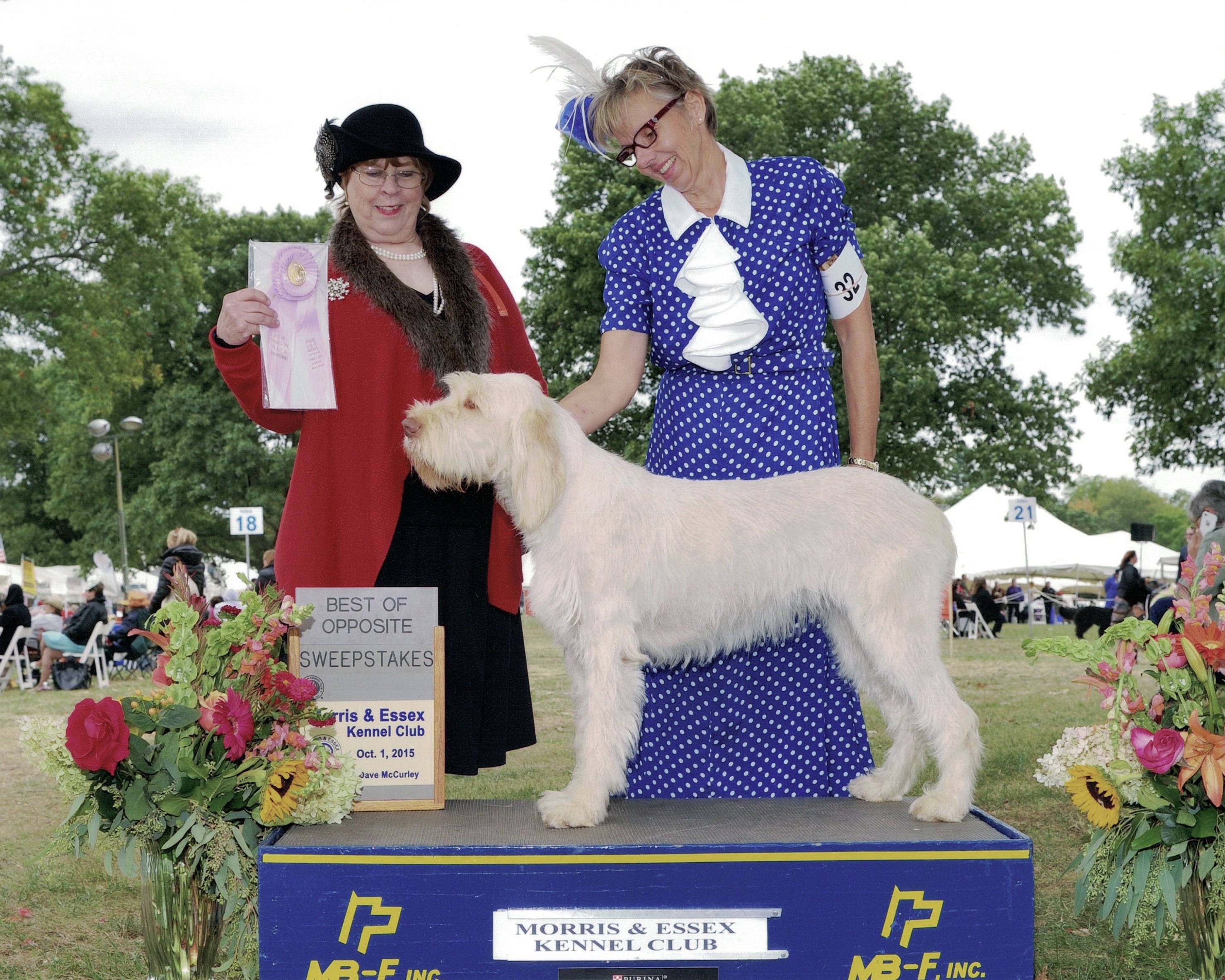 Zita, Maggie’s daughter, debuded in the show ring at 6 months old earning 13 points and going Best of Breed over specials. She finished her championship by 15 months consistently showing off her functional, effortless movement. Zita will now focus on finding herself in the field and following in her mom and big sis’s footsteps. 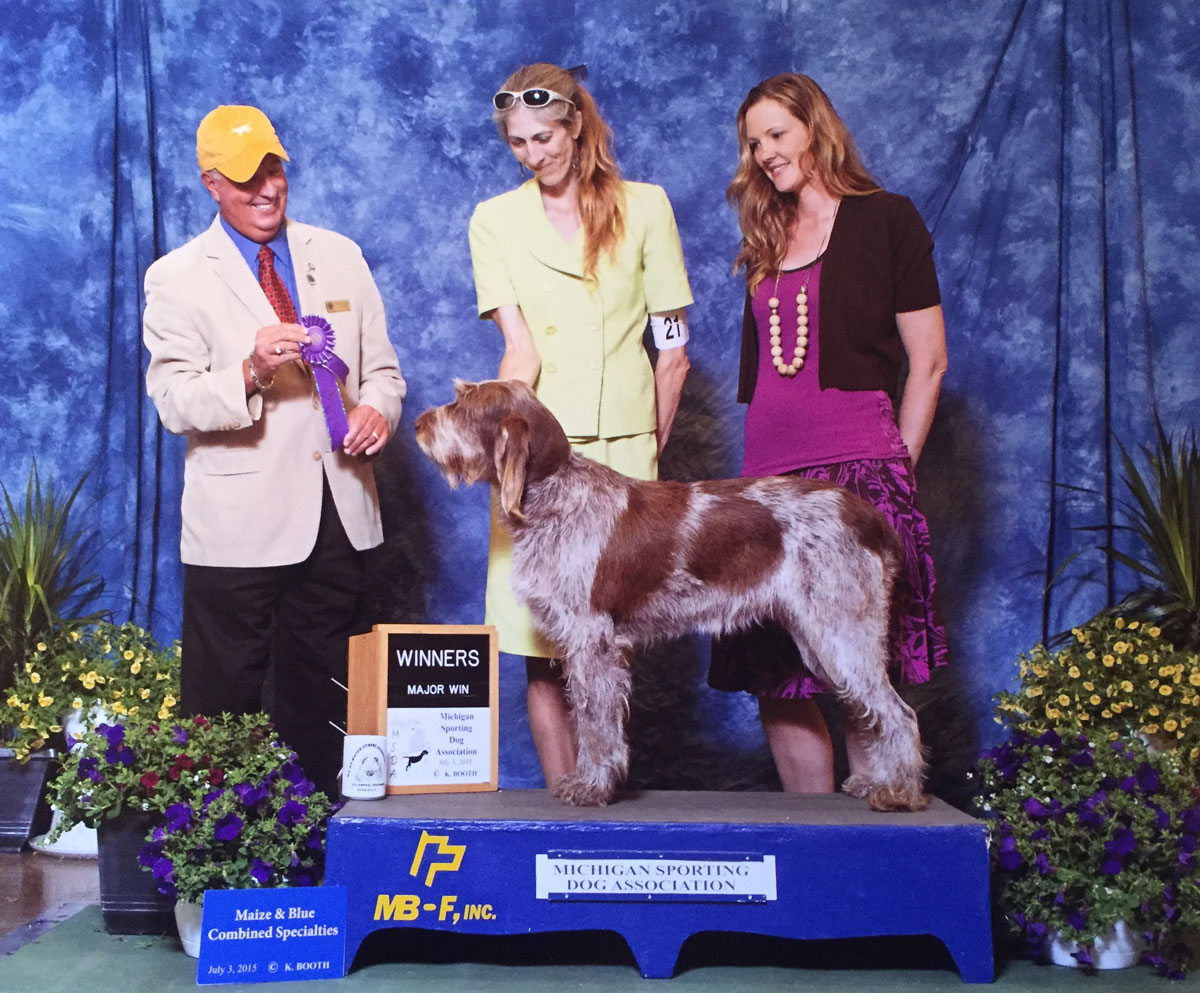 Tessi exudes what a Spinone is all about. She is a social butterfly with a sweet temperment and a natural in the field. She finished her show championship at 17 months. Her natural ability in the field comes from both dam and sire being the first breeding of NAVHDA VC’s in the states. Her field training is well under way, she has achieved a Prize 1 in NAVHDA Natural Ability, Prize 2 in NAVHDA Utility, and on her way to her AKC Senior Hunt title.